MIDORIGreen Direct is a safe alternative to ethidium bromide for visualization of double-stranded DNA, single-stranded DNA, and RNA in agarose gels. In contrast to most other non-ethidium bromide based dyes, MIDORIGreen Direct is just added to your samples. The loading dye is already included.  You do not need to add any other loading dye to both gel matrix and running buffers

Get the best signal to noise ratio

The direct staining of the DNA rather than the gel eliminates the background staining providing a perfect signal (Fig. 1). MIDORIGreen Direct was developed to work with Blue Light LED illuminators, but you can also use it with a regular UV transilluminator.

The isolation of DNA from agarose gels enables downstream applications. It is well known that many dyes, such as ethidium bromide or even SYBR™ Green are strong enzyme inhibitors due to their intercalating properties. MIDORIGreen dyes bind to the DNA backbone. This results in a much higher efficiency for downstream applications, i.e. cloning (Fig. 2), seqeuncing, PCR, etc.

MIDORIGreen Direct stains are provided in a form of 10X sample loading dyes and they are to be added to your samples only. You do not need to add any other dyes to the gel matrix nor to the running buffers.

Staining products after a restriction digest 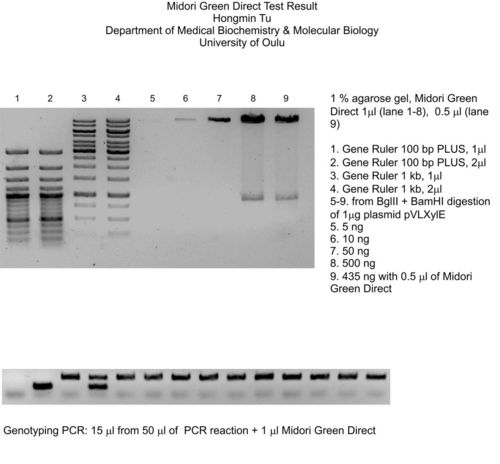 MIDORIGreen Direct is optimized for blue/green and blue LED light, leading to very good fluorescence signals of DNA and RNA in agarose gels. MIDORIGreen Direct was developed for direct staining of nucleic acids.

Compatible, but not recommended

The chemical structures are completely different. we tested to use MGD as MGA and vice versa. We can’t recommend both applications. As you try to use MGD as MGA, you need a lot of MGD and ladder in order to get observable bands. Samples with a low concentration could be stay undetected by this way. MGD was designed for addition to sample and is much less concentrated than MGA. It is very uneconomic to use MGD in the way like MGA – you need more than the 10 fold amount in the gel in order to observe bands. As you try to use MGA as MGD it is also problematic, because MGA is too high concentrated and is running in the opposite direction. I tried to reduce the MGA concentration, in this case you see some bands, but they are very weak independent which dilution is used. Summarizing you can say both stains are designed (with different structural formula) and optimized for different applications (in gel and addition to a sample) and it is not recommended to try to use them in another way.

What is the difference between MGA and MGD and how stable are these stains?

The main difference is that Midori Green Advance (MGA) is for in gel and post staining (means it is used like ethidium bromide) and Midori Green Direct (MGD) is added directly to the sample. Depending on the gel documentation system we recommend to use one or the other but you can use both for every illuminator (UV 302, 365 nm, Blue illuminator and Blue/Green transilluminator) – only the performance can be increased to an optimal level. For example we recommend to use MGA if the user has a UV transilluminator, because the results are fantastic with that stain. A really great performance you get with our Blue/Green LED instruments and MGD – no background at all and an intensive signal. Both stains are stable on room temperature, so shipping at RT is no problem, but we recommend to sotre the stains at 4°C.

Do MGA and MGD work with Agarose and acrylamide gels?

Our customers gave us the feedback that MDG and MGA (post staining) work for acrylamide gels but they are primarily designed for agarose gels.

Can you use Midori Green in a Polyacrylamid/Urea Gel?

Is Midori working in Urea/Formamide gels?

Unfortunately, it is not working. That’s because of the Formamide. Urea gels are working.

Our Midoris are DMSO free.

I use Green Taq from Promega with the dye. Could the dye create some kind of conflict with the use of MGD?

It depends which illuminator you are using. There will be no problem with a UV-light illuminator because the dye won’t be visible. But if you use blue/green LED illumination it is possible that you can detect the dye form the Promega Green Taq. If it is a bad luck the band of the sample is as big as the dye band. In this case the dye band would overlay the DNA band. But generally there should be no interaction between Midori and the Promega dye. So as long as UV-light is used or the DNA band has not the same size as the dye band there should be no problem.

Can MGD bind to DNA of uncleaned PCR products?